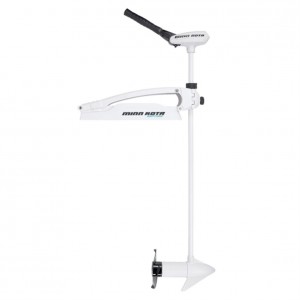 The Riptide SM bow mount trolling motor from Minn Kota was built with reliability and durability as key objectives. It seems they have succeeded. The Riptide SM is a highly respected, powerful trolling motor that stands the test of repeated saltwater usage with fully encapsulated electronics and a sacrificial anode mounted to protect the motor from destructive corrosion.

Minn Kota’s Riptide SM is mounted either via the Latch & Door design or Bowguard 360 depending on the model you choose (see list below) but the most popular 80lb thrust models are available in both, leaving the choice up to you.