This is the place in north Florida to wake up on a summer morning. Mullet jump and stingrays scoot every few hundred feet. Dolphins (Porpoise, not the eating kind) are an everyday occurrence. Even with no action whatsoever on the water, you will have a great visit you’ll remember for the peace and tranquility only a special place like the Forgotten Coast can provide. 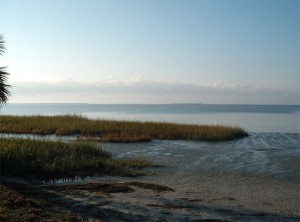 The “Forgotten” Florida Gulf coast, officially stretching from Mexico Beach to St. Marks and dotted with inlets and bays, is one of the best places to find tailing reds. The water is usually shallow enough to make these fish accessible to anglers in powerboats as well as those wading in submerged cordgrass. The number of productive areas is immense. Some say that the best red fishing is at Lido Key in Sarasota, or Waccassassa Bay in Levy county, or n Choctawhatchee Bay at Fort Walton. As a native of Apalachicola bay area, I believe the most enjoyable fishing experience can be found on the bayside of St. Joseph peninsula–also known as Cape San Blas.

This area is known as the Forgotten coast because it is one of the undeveloped treasures of Florida, surrounded only by small fishing towns along US98. There are many other hotspots in this region, like: Indian Pass, St. George Island, St Vincent Island, and Goose Creek bay. The most outstanding feature of St. Joseph peninsula is its shape—a giant C that extends from the mainland, making it a gigantic tidal swimming pool. The water falls far from shore at low tide and the rising tide brings schools of redfish, as well as spotted trout, amberjacks, and sharks.

Redfish—also known as red drum, channel bass, and spot-tail bass—can be found throughout the southern United States, from the Atlantic to the Gulf of Mexico. A deep copper-like red back, torpedo shape, and a large black eyespot along the tail make them beautiful fish worth holding in your hand. They’re most easily found in grassy flats and brackish creeks—ideally on the early side of a rising tide, when schools move closer to shore to hunt down their favorite foods. 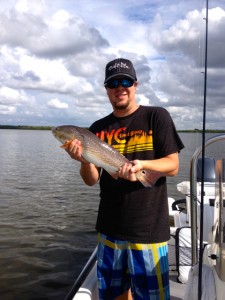 In the shallows, a red searching for food—usually shrimp and fiddler crabs—drags its mouth in the dirt and its tail breaks the surface of the water, showing off the trademark spot. This is what we refer to as“tailing”.

A gold flecked D.O.A shrimp is a must have in this area, for those who prefer artificial lures. On watercraft, trolling a spoon plug can also be productive. Traditional anglers may have good luck in this area with dead/cut bait like frozen shrimp or squid; however, there is an abundance of pinfish that gang up to nibble and steal. If going with the real thing, go live. There are many bait shops and places to cast net for mullet along Cape San Blas road.

The last few miles of the peninsula make up the wilderness preserve in St. Joseph Peninsula State Park. This area is only accessible by boat or hiking and requires you to pack everything in and out—including water. It’s where you find coastal marshes, underwater grasses, sandbars, rolling pine sandhills that provide a great view of the water below, and rarely is there anybody to ruin it for you. If the action on the water is just too good to leave, the preserve has seven primitive campsites. Those who are less hardy will find over 100 full-facility campsites and seven cabins to spend the night.

Mayowa Ogunjobi started fishing in the grassy flats of the Forgotten Coast region of Florida, where he grew up. He now lives in Melbourne, Florida with his wife and five cats whom all appreciate him bringing fish home.